Lies, empty promises and deception around the Japanese nuclear policy

In March this year, Japan commemorated the sixth anniversary of the powerful earthquake and the tsunami responsible for destruction in vast areas along the northeastern coast of Honshu, north of Tokyo. These natural disasters caused power failure at a nuclear station in Fukushima, resulting in a level-7 accident, considered as serious as the one occurred in Chernobyl in 1986. The health of hundreds of thousands of people was threatened.  PM Abe claimed at the IOC Conference in Sept. 2013 in Buenos Aires, where Tokyo was chosen to host the Olympics games in 2020, that the leakage of radiation-contaminated water was “under control.” However, the problem has not yet been contained as of today. Thus, the health of people in affected areas is still at risk.

The survivors of the earthquake and the tsunami have more or less restarted their new lives. For those who had been forced to flee their homes and communities to avoid serious exposure to radiation, however, the problem of having to live with uncertainties is still very much an on-going issue. When the government and TEPCO (Tokyo Power Company), the operator of the Fukushima plant, decided to build a nuclear power station in the prefecture back in the late 1960s, they must have showered the local governments with cash, while promising their communities a bright future with “clean and safe” nuclear energy. This was shown by the slogans splashed across several gates erected in the late 1980s in the town of Futaba, where the plant is located, which still remains as a ghost town. One of the slogans saying “Nuclear Power: the energy of bright future!” used to welcome the visitors to town and to remind the residents of their promising future (the photo taken on Feb. 17, 2015 by Jiji Press). The gates stood till Dec. 2015, reminding the residents of the irony of what was promised and what had actually happened. 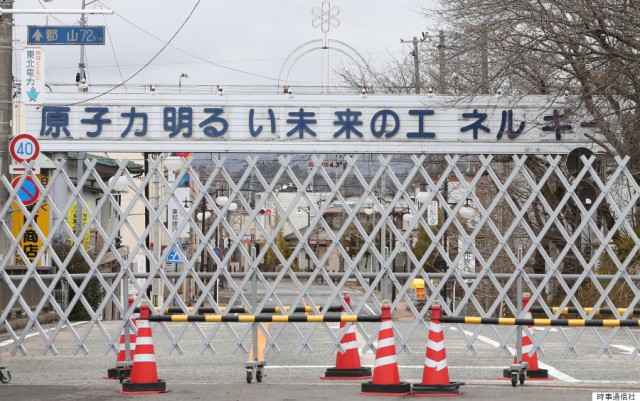 Since the meltdown in Fukushima, most of the nuclear reactors elsewhere in Japan have been idle for check and maintenance. However, PM Abe’s government has been eager to see as many of them as possible restarted under the pretext of energy shortage, and a few of them have managed to obtain a green light by the Japanese Nuclear Regulatory Commission (NRC) to be back in operation. One of the nuclear reactors now in operation since Aug. 2016 is Reactor No. 3 in Ikata, Shikoku, operated by the Shikoku electric power company, commonly known in Japan as “Yonden.” However, this plant is located near the base of Sadamisaki Peninsula, where the 40-km- long, narrow peninsula joins the island of Shikoku, the smallest of the four main islands comprising Japan. 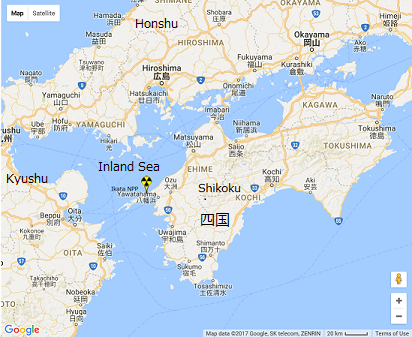 The NRC claims that the particular reactor had met all its safety standards, which it asserts as the most stringent ones in the world, but it takes no responsibility with regard to the evacuation of residents in case of an accident. The evacuation operation at a time of a disaster is left for the host communities to deal with. However, Takashi Hirose, a well-known writer in Japan, warns that the the Ikata nuclear plant lies on the Median Tectonic Line, the major fault in Japan that runs from Kyushu, through Shikoku and to Honshu. Thus, the plant is located in an extremely dangerous spot.  There have been two powerful earthquakes in Kyushu causing immense destruction and many smaller ones reported along this fault since 2016. No one knows when a powerful one may hit the Ikata area that may cause another disaster like the one in Fukushima. 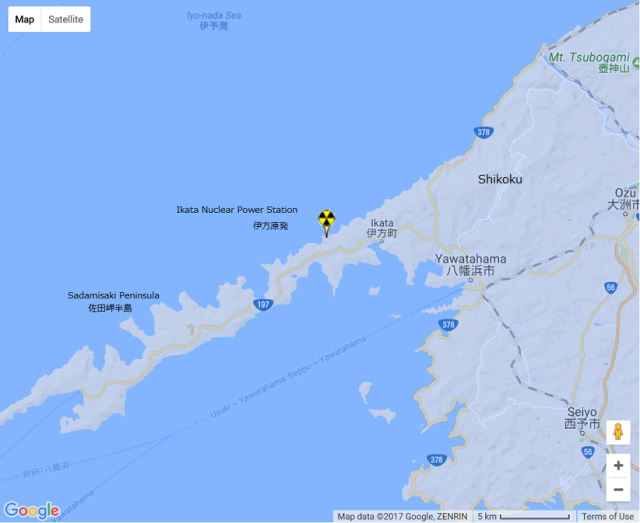 The enlarged map of the peninsula shows that in case of a major earthquake in the area, the main road running to the tip is likely to be destroyed and the residents stranded. Small side roads may also become impassable, and rescue squads may not be able to reach different rural communities sparsely populated. The only way for the residents, mostly old and retired, to escape from radiation-contaminated areas would be by reaching to the shore. This may not be practical if roads and shorelines are destroyed by earthquake and if there is a risk of tsunami. The contamination of the Inland Sea could also destroy the major industries in the area, namely, fishing, tourism and marine transportation.

With regard to energy shortage the government claims, the data provided by Yonden itself refute this, according to the leaflet provided by the Liaison Group in Kohchi Prefecture for the Elimination of Nuclear Power and for the Promotion of Renewable Energy, 2016. As shown in the graph, Yonden had been capable of supplying more than 6 million KW of electricity just from non-nuclear energy sources between 2006 and 2015. On the other hand, the power use at the peak moment had been far below its supply capacity even from non-nuclear sources, especially since 2011. Furthermore, power demand declined since 2011, probably because consumers became more mindful of not wasting energy after the disaster and because many energy-saving electrical appliances have been developed.

Due to a slow decline in Shikoku’s population, the electricity demand is not expected to increase much in the future. Therefore, the graph indicates that Yonden had no reason for restarting its nuclear reactor. Did it place its business interest over and above the safety and livelihood of the residents in the areas where Yonden has traditionally supplied electricity?

Various citizens’ groups, living near the nuclear reactors now in operation or soon to be restarted elsewhere in Japan, have initiated injunction lawsuits against the operators of the reactors on the ground that their health and livelihood were at risk. However, the separation of power seems little effective in Japan when the policies promoted by the national government are at stake. Sometimes, judges in lower courts are courageous enough to adjudicate in favor of complainants, but sadly, decisions in higher courts often side with the government.

A group of people in Hiroshima brought such a lawsuit against Yonden at their district court.  It asserted that safety measures at Ikata against major earthquake and tsunami might not be sufficient enough and that in case of a disaster, their health would also be seriously affected. On the other hand, Yonden maintained its position that the reactor’s safety had been secured by the measures imposed by the NRC based on the most recent scientific knowledge available. On March 30, the court in Hiroshima dismissed the complainants’ claim. However, this was only one of the few lawsuits against Yonden now going on as similar ones had also been filed at district courts in other cities (Nikkei, digital version, March 30, 2017). The complainants in Hiroshima have decided to appeal the recent decision to the higher court. Thus, their fight continues.

Since the late 1960s, the Japanese government has promoted nuclear power as a cheaper and cleaner energy source compared to fossil fuel, mostly imported. Thanks to this policy, a total of 54 reactors had been built throughout the country by 2011 and the investment in renewable energy remained relatively minor till then. There had always been skeptics and critics against the claims made by the government and the nuclear operators, but their voices had not been loud enough.

Since 2011, the Japanese people have been concerned about the total and eventual cost of the accident and who would pay for that. The government had attempted to estimate the cost, covering compensation, clean-up operations and decommissioning of the reactors. The initial estimate by the government was around 11 trillion yen (about 110 billion dollars), but it kept rising. The last one announced in Dec. 2016 was as high as 22 trillion yen, and this can still go up. The Ministry of Economy, Trade and Industry (METI), the one responsible for promoting nuclear energy, proposes that a part of the cost be added to electricity bills for all consumers during the next 40 years.

The consumers that METI refers to includes those who now buy power from the companies selling non-nuclear energy only. While well-established power companies enjoyed monopoly in their given areas till the end of March 2016, the liberalization of the market has allowed smaller, non-nuclear companies to enter. METI justifies its proposal on the ground that nuclear energy benefited everyone up to 2011 (Asahi Shimbun, dated Dec. 09, 2016). Does this mean that those who were born after 2011 would also be expected to foot the bill when they start living on their own till they reach 40? The debate continues.

Who has more accurate calculation of the cost of accident in Fukushima remains to be seen. What is absolutely clear, however, is that nuclear energy has proven to be extremely costly and dangerous to people’s health and environment. So, what other justifications has our government now found in continuing to promote nuclear energy? If another powerful earthquake hits someplace in Japan, causing disaster like the one in Fukushima, would the authorities and the nuclear operator try to avoid taking responsibilities, as they have done in Fukushima, by saying that such a powerful earthquake was simply unexpected based on the most recent scientific knowledge available?